Turkey is full of major ancient cities, because it’s located at the junction of trading between the east and the west.

Sardes is one of the most important of these cities, since it was the capital of Lydia, where first coins were issued in the history. Later on, it became onr of the important cities of the Roman Empire.

The photo shows Gymnasium from the Roman period. 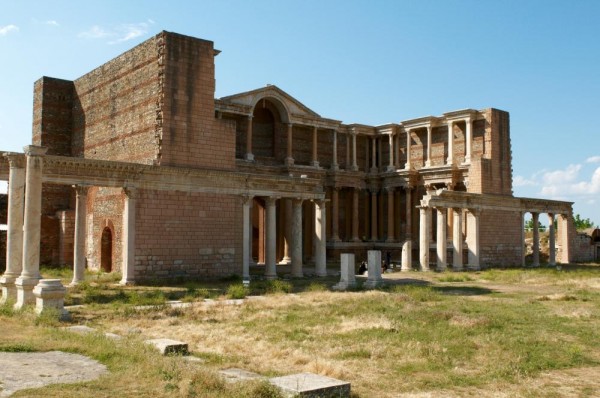 Sardis, also Sardes (Lydian: Sfard, Greek: ???????, Persian: Sparda), modern Sart in the Manisa province of Turkey, was the capital of the ancient kingdom of Lydia, one of the important cities of the Persian Empire, the seat of a proconsul under the Roman Empire, and the metropolis of the province Lydia in later Roman and Byzantine times. As one of the Seven churches of Asia, it was addressed by the author of the Book of Revelation in terms which seem to imply that its population was notoriously soft and fainthearted. Its importance was due, first to its military strength, secondly to its situation on an important highway leading from the interior to the Aegean coast, and thirdly to its commanding the wide and fertile plain of the Hermus.

The earliest reference to Sardis is in the The Persians of Aeschylus (472 BC); in the Iliad the name Hyde seems to be given to the city of the Maeonian (i.e. Lydian) chiefs, and in later times Hyde was said to be the older name of Sardis, or the name of its citadel. It is, however, more probable that Sardis was not the original capital of the Maeonians, but that it became so amid the changes which produced the powerful Lydian empire of the 8th century BC.

The city was captured by the Cimmerians in the 7th century, by the Persians and by the Athenians in the 6th, and by Antiochus III the Great at the end of the 3rd century. In the Persian era Sardis was conquered by Cyrus the Great and formed the end station for the Persian Royal Road which began in Persepolis, capital of Persia. During the Ionian Revolt, the Athenians burnt down the city. Sardis remained under Persian domination until it surrendered to Alexander the Great in 334 B.C..

Once at least, under the emperor Tiberius, in 17 AD, it was destroyed by an earthquake; but it was always rebuilt. It was one of the great cities of western Asia Minor until the later Byzantine period.

A photo showing the toilets: (Probably from the Byzantine period) 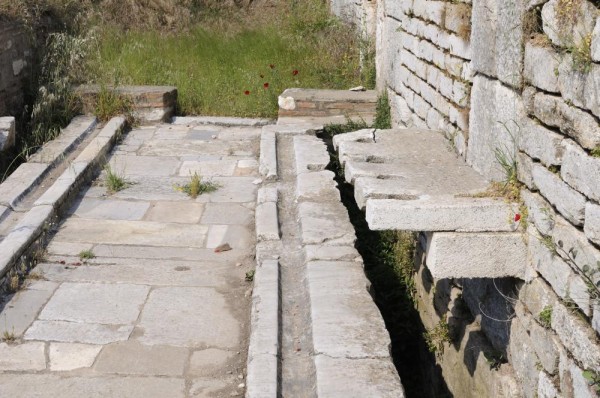 The early Lydian kingdom was far advanced in the industrial arts and Sardis was the chief seat of its manufactures. The most important of these trades was the manufacture and dyeing of delicate woolen stuffs and carpets. The stream Pactolus which flowed through the market-place “carried golden sands” in early antiquity, in reality gold dust out of Mt. Tmolus; later, trade and the organization of commerce continued to be sources of great wealth. After Constantinople became the capital of the East, a new road system grew up connecting the provinces with the capital. Sardis then lay rather apart from the great lines of communication and lost some of its importance. It still, however, retained its titular supremacy and continued to be the seat of the metropolitan bishop of the province of Lydia, formed in 295 AD. It is enumerated as third, after Ephesus and Smyrna, in the list of cities of the Thracesion thema given by Constantine Porphyrogenitus in the 10th century; but over the next four centuries it is in the shadow of the provinces of Magnesia-upon-Sipylum and Philadelphia, which retained their importance in the region.

After 1071 the Hermus valley began to suffer from the inroads of the Seljuk Turks but the successes of the general Philokales in 1118 relieved the district and the ability of the Comneni dynasty together with the gradual decay of the Seljuk Sultanate of Rum retained it under Byzantine dominion. When Constantinople was taken by the Venetians and Franks in 1204 Sardis came under the rule of the Byzantine Empire of Nicea. However once the Byzantines retook Constantinople in 1261, Sardis with the entire Asia Minor was neglected and the region eventually fell under the control of Ghazi (Ghazw) emirs, the Cayster valleys and a fort on the citadel of Sardis was handed over to them by treaty in 1306. The city continued its decline until its capture (and probable destruction) by the Mongol warlord Timur in 1402.